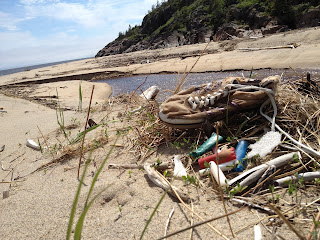 "Our imprints on nature are not only from the soles of our shoes." Two plastic items frequently found on the shoreline: spent shotgun shells and tampon applicators. One is all about death, the other about bringing to life.
Posted by Teacher at 2:42 PM No comments: 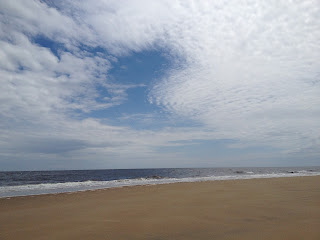 Head tilted back,
Chin pointing forward,
Young Buddha looks on thoughtfully;
His ideas emerging from his forehead
Like a dream of yesterday's clouds.

Posted by Teacher at 3:18 PM No comments: 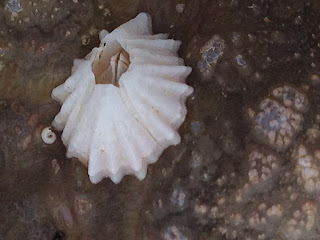 The barnacle
wore its exoskeleton
like an exquisite wedding dress,
peeking out with the coy smile of a new bride,
followed closely by Shelly, the smallest flower-girl ever.
Posted by Teacher at 3:11 PM No comments:

This Pseudo-Haiku Has Two Verses 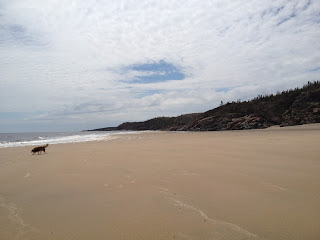 Eider duck and his wife
Race where the sea meets the sand;
He a sports car, she a sedan.

In matters of style
He wins the race,
But in questions of speed
She is holding her place.

Posted by Teacher at 2:57 PM No comments: 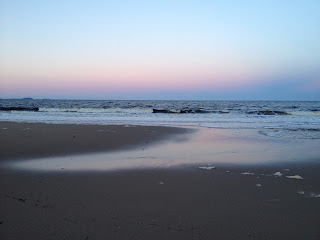 The sky is leaking
onto the sand, and the clouds
have come down to rest. 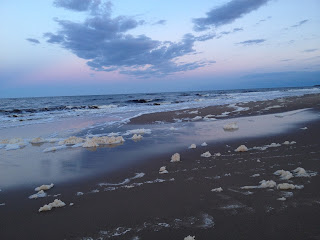 Posted by Teacher at 9:12 PM No comments: 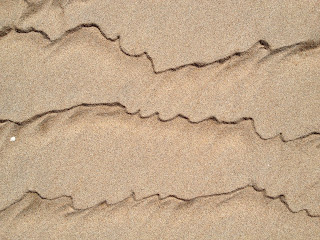 The photographer-poet walked down the beach;
A young girl and an old woman at her side.
Behind her, one set of footprints stretched back to where she began.

The young one waded barefoot through the tide pools,
The poet was thankful for her sturdy waterproof sports sandals
And the grey-haired woman marvelled at the way her green boots from L.L. Bean
Had held up after all these years.

When they reached the rocks the young girl scrambled up,
Nimbly making her way over the difficult parts
While the photo-po picked her way carefully,
Thinking of dangers and consequences.
The old woman just stayed by the rocks,
Wishing away her osteoarthritis and remembering
How wonderful it felt to scamper across sun-warmed surfaces.

The poet-photographer and the young woman continued on,
There were no footprints to show how many passed on the rocks,
At least once their feet were dry.
At first some of the rocks were slippery with seaweed,
And the barnacles made it challenging for the girl’s bare feet
But she was young and tough and made it through with ease.
The poet took longer, her progress slower,
In part due to her knees, which didn’t work as well as they used to,
But also because she kept stopping.

She stopped for more than one reason,
Yes, there was the knee problem,
But she also stopped to watch for whales,
Minkes, in French “les petits rorquals.”
If she was patient and just watched long enough
She would see their shiny black backs
Break the surface of the water, especially on a calm day
When the sea was a “mer de l’huile” shining smooth and white in the sunlight.
On days like this the whales were easy to spot.
They would surface three times, short, short, and then long;
Whale Morse code meaning: I am moving through time;
Don’t destroy my ocean; what are all these plastic bags doing floating in my world?

The young girl looked back at the photographer who had stopped to capture
The close up miracle of a barnacle waving its feather tongue.
The girl did not slow down; she wanted to keep moving forward.

Sometimes the photographer-poet stopped to listen:
The waves sucking on the sand as the tide shifted;
The ocean breezes lifting the hair around her face;
A white-throated sparrow calling almost mournfully
In the Black Spruce on the cliffs above.

Sometimes it was the smells that slowed her down:
Can rocks have smells? Wet rocks, dry rocks in the sun.
The sand, chilled or warmed.
Seaweed, like this bright sea lettuce,
Its fresh leaves limp and wet, chlorophyll green.
The poet picked up the plant, separated a piece of leaf from the rest,
Rinsed off the sand in the brine and put it in her mouth.
Salty and strong, she squinted her eyes and chewed anyway,
Swallowing this ocean offering, imagining survival skills.
Remembering a day in Maine, a sea urchin cut open with a jack-knife
Orange roe offered up on the blade; the pungent taste.

The photographer poet is alone again.
She is standing on the highest point of rock between two bays.
She can look forward and back over the way she came up.
The sea stretches out endlessly in front of her, blue and moving.
She takes a picture. 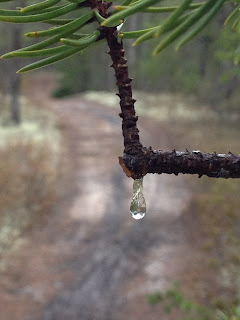 After the rain there were shiny droplets everywhere but this one looked odd. It was sap. I know for sure because I tasted it! :)
Posted by Teacher at 6:31 PM No comments: